The summer has been slipping past, a blur of celebrations, and joy, mingling with a profound pain for my family and for a good friend. It’s been a confusing one, a good one, a terrible one, the best—and worst— all wrapped up in one. That’s the gorgeously complicated balance we lead in this life. The constant struggle between the wonderful and the terrible—and deciding which side we want to come out on.

Joe and I decided to put house hunting on hold for the time-being. A decision that at first left me deflated and, frankly, feeling like we had failed somehow. But I’m changing that thinking. I’m taking this as an opportunity. One to live the sort of life I dreamed of when I was young. I’ve wanted to live in a city for as long as I could remember. Growing up I used to spend the weekends with my aunt in Boston. It was loud; it smelled of too many people and exhaust and food; the streets were congested with cars and feet and the constant din of voices. I’d lie awake at night in her room listening to the sound of cars below, honking horns—surrounded and comforted by the sheer number of people there. The apartment was always bursting. Her roommates sparked with an energy tinged with Irish accents. They let me tag along to local pubs to eat fish and chips and listen to live music (this is something I’ve never fallen out of love with). It was the life I wanted. I longed for an existence that intertwined with that smell of the city and the noise and the music.

I’m not ready for a house in the suburbs. While I mutually long for an expansive, flat, grassy backyard (seriously, who other than an agility person wants this?) the desire to fulfill those city dreams prevails. We’re young. We’re going to act like it for a while.

So Providence will take the place of Boston for now. Not as noisy, but still eclectic and filled with amazing people. Walkable to restaurants and shops and a farmers market and parks for the dogs. A neighborhood close to everything and already starting to feel like a community we belong to. Ah, but not yet—still have to wait until September for that. (September you beautiful month, you).

Last year I had a list of things I wanted to do outside of agility. There were mountains to climb, oceans to visit, fires to sing badly around, and a grandiose plan for what those three months could hold. This one has taken on a different, unexpected form. I knew that being named a member of team this year would change many things, and it has. It’s changed the way I approached the show schedule this summer, showing restraint even though we are closing in on Bolt’s second MACH rapidly. It’s changed the way I condition him and train agility every week. If possible, I’ve become more attuned to his movement and his body, constantly checking for signs of soreness, weakness, areas that need progress. He’s fine, I keep being reassured of that, but—still. It comes from a place of sincere fear. Of seeing friends who do everything right, and yet still have the worst happen. I play with that balance of letting a dog be a dog and making sure that Bolt is treated as more than a dog (because he is, isn’t he?). My heart broke a month ago when this fear hit so close to home I could feel the reverberation.

Cruzer and Bolt trained together every Wednesday night. Diane and I have been competing side-by-side for years—preceding our young, talented boys. We squeezed hands in January, both blinking away fierce tears as we promised to give May everything we had this year. We marveled at the Californian coastline. We celebrated and comforted one another at tryouts. And once team was announced we breathed a mutual sigh of relief, squealed with uncontrollable joy, and made plans. But, this summer has changed those. Cruzer’s story is not mine to tell, but I feel it, it’s with me. It has changed my perspective and the way I will approach the remainder of this summer leading into Worlds.

I’ve always reminded myself and others to cherish every run and every moment that we have with our dogs, but that has never felt more pressing or urgent than it does now.

I wanted a way to spread the power of unity and positive concentrated energy, which is why CruzerStrong started. I’m blown away by the response from this community (not sure why, it has *always* proven itself to be the most amazing group of people ever).Every day there are new people joining our group on Facebook. Every day more people are posting photos of themselves and their dogs, some with wrist bands, others with messages of hope and recovery.

It makes my heart swell and many days I’m overwhelmed with it all. Thank you. 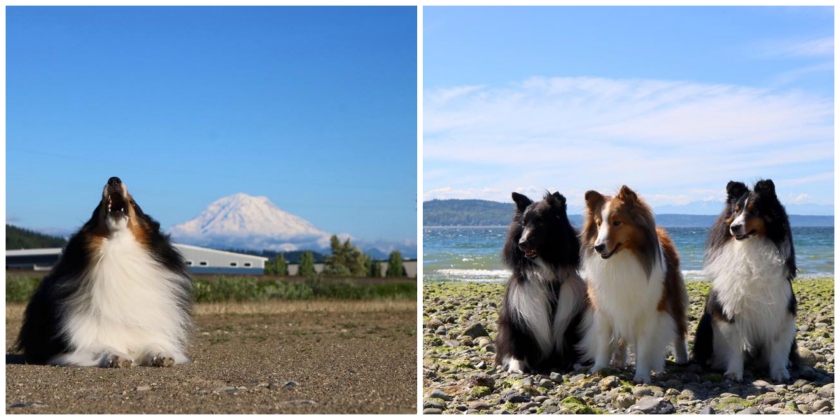 A few weeks ago we had our first team practice outside of Seattle. It was surreal and incredible (and over far too quickly). It held within it the same balance this summer has– the amazing mixed with the terrible. I had a hard time reconciling my excitement with the breaking disappointment of not having my friend there to share in it with me. But, as I should have expected, she was more than graceful and strong through it. She encouraged me, she praised me, and never once let the edging feelings of guilt I had feel justified. I have so much to learn from her.

On the last day of practice we took our head shot photos. It’s something I’ve quite literally dreamed about. Nancy stood behind the camera to get the attention of the dogs and said, “Meg! It’s real!” Maybe the disbelief was still on my face. (It could still be). The weekend was the perfect shake-up that I needed. My teammates helped inspired a renewed sense of motivation– along with a very long and incredible conversation that took place at the airport waiting for another delayed flight. Ah, thank you thank, you for those hours, Kat. About who I was as a person, as a handler, and what I wanted to bring to the table in fall.

I owe it to Bolt to be the best handler I can be for him in September.

My goal since practice is to work not only on my agility handling, but on making myself a better athlete in general. (Unsure I’ve ever used that term to describe myself, but there it is). Every day since I’ve devoted myself to that goal, a countdown on every calendar pointing to our next practice. Stronger, faster. That has been the mantra repeating in my head every day that I run, every night that I condition Bolt, and every morning when that motivations seems to have waned ever so slightly.

Our next practice is in two short weeks in Connecticut. Local enough to stay with a friend and commute– at a facility we frequent often and love, surrounded by my agility village. What a privilege, what an absolute honor– and yes, how surreal still.

I want to end this summer with strength. In both body and mind, lit and guided by the incredible people around us. 46 days until we leave for Spain. It’s real, it’s coming–

And we’ll be ready for when it does.

(Side note, more t-shirts are coming! Thank you to everyone who ordered from the last batch. The next design was created by my amazing husband and I’m SO excited to share it with you all soon! Link will be here, as well as other places on the interwebs ❤ )