I expected to be upset after Worlds—a lot, actually. Over the end of something great, an adventure I’ve been pining over for most of my life. I haven’t cried over it, surprisingly enough, though I’ve come close.

Likely that’s because life elbowed in as soon as we landed, in the form of a chair sliding on a kitchen floor.

My grandmother has been sick for some time. For those close to me, you understand this relationship well. More of a parent-child role, rather than a grandparent. She helped to raise me. We speak (spoke) on the phone daily all my adult life. Before leaving for AWC, she made me promise that no matter what happened to her, I wouldn’t leave the competition. It was a promise kept, but still, that chair. In a daze from medication and lack of sleep, she climbed on a kitchen chair last Thursday, lost her balance, and fell. I wasn’t there, but yet I imagine that sound over and over. Wood creaking against tile, a heavy thud, the sharpness of bone connecting to the floor. I don’t want to hear it, but I do.

A fall is bad for anyone over the age of 75, but specifically for those in end-stage cancer.

I was kept from most of this knowledge while we were in Spain. An attempt not to drag focus away from the competition is leaving me with a nagging sense of guilt (it’s an inherited trait, this guilt, among other things), but being back home, we have been thrust fully into it. An inescapable truth leading to the construction of a well-built wall. (That’s the other inherited trait, in case you were keeping track). I have distanced myself from this pain as well as the end of AWC as much as I can. Healthy? Maybe not. Necessary? Yes.

Walls are good at keeping tears at bay, too.

They started a little the night we returned, as I hung my uniform back in my closet, being sure to include the jersey I wore alongside it. There was a metaphor in there. About hanging things up, shutting a door. Maybe it was the jetlag and lack of sleep and the culmination of too many emotions spilling out of the week. I worried that after AWC I would feel a little emptier– and I’d be lying if I said that wasn’t true. I feel sort of dug out in the center, a little raw, and a lot adrift. Imagine planning a vacation for ten years (even if you didn’t know the exact destination) and visualizing it over and over. There was so much leading up to it, so much hope and energy and imagination put into what would happen and what things could be. There were countdowns and parties and then, just like that, it’s over.

Where do you go next? What now?

I’m not entirely sure it would be possible to adequately describe what the week meant and how incredible of an experience it actually was. At one point in the weekend Maureen asked me if AWC had lived up to my expectations, and my answer was immediate and truthful: it was better.

If you’ve never been, please, please try. Add it to the bucket list even just to spectate. It is worth it, it will change your perspective on this sport, I promise.

There is an unparalleled energy in the arena which exists even when the five thousand spectators weren’t chanting from the stands. I can romanticize endlessly of how countries come together for the love of this sport and these dogs. How language barriers break down over the mutual understanding of communicating on course.

Reaching this goal was only a step. Getting to the line, laying down runs, learning what strengths we had and what more we needed to work on was invaluable. There was a worry long before we landed in Spain (I know, lots of them) that stepping to the line would prove to be a nerve-shattering experience. I feared that my mind would race as fast as my heart until the courses blurred and were forgotten. That the din of the building, both at it’s loudest and quietest, would be too much. Tori said simply as we watched, “You’re a competitor, it won’t be.”

I learned that we have a place there—that we belong, that we can thrive as competitors.

Goals evolved quickly over the weekend. The fire in me was poked every time the song “Champions” blared over the PA until it was consuming. I think many of my teammates felt this same swell of motivation. We began making plans in the stands for the coming months. I scribbled training notes in my book and wrote back a list of things I wanted to work on back home. We had mistakes on course, but they were small, manageable, fixable. Goals expanded to fill the hole leaving Zaragoza would create.

Last night, as I left my grandmother’s, I was called back in. Her neighbor was visiting, sitting at the foot of the newly-delivered hospital bed in the living room and they had been talking. She looked at me as I came back in, my grandmother, and asked for me to get my computer, to show her friend Bolt’s runs from Worlds.

Fighting hot tears then (and now) with that request. To be so proud of that little dog and what we did even then. It means so much to her, more than I realized. I owe it to her to continue towards this goal.

That’s a deeper promise I can keep. 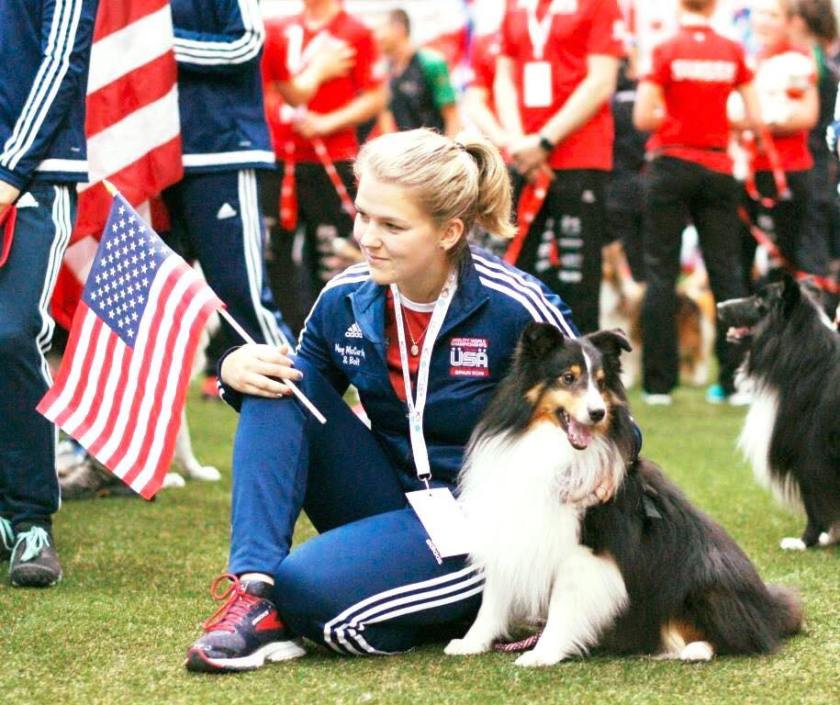