With fear we have two options: to run from it, or to overcome it.

Usually I wait a week or longer after an event to decompress and process my feelings on it—but this Nationals was always going to be different and so is my heart following it. Before I left, I wrote about the joy I wanted to experience in Georgia, joy that my dog and I were back to competing, and being healthy and happy. I wrote that my expectations on outcomes weren’t as high as last year’s for many good reasons. We had run in a single one-day trial before NAC this year. With only a handful of courses run before this event my expectations were not focused on performance, but rather the experience. Friday, however, gave me something more unexpected than I had thought: a sore dog.

We had a day of travel Thursday that was uneventful and certainly not the most grueling trip we’d ever taken. Bolt settled in well to the show site. We saw many old and new friends, toured the incredible grounds, and marveled at the perfect surface. I’ve been doing my best to turn off the consistent nagging voice that tells me something’s off—four months of worry had really taken their toll on the joy this sport once brought me. I was excited to be done with that worry, to release it back to the world. But Friday, after our warm-up run, the nagging was loud. I chose not to give it life, as I’ve been told so many times before to do. But still, I worried even if there was nothing I could see. Before our ISC round I took Bolt from his crate and knew immediately he was off. He was sore. Not lame by any means, but not perfect, either. I scratched, a first for me at a National event, without question and quickly began consulting with those who helped with our rehab and treatment plan over the last few months. Careful hands, reassuring phone calls and texts, and he was back to his normal self almost immediately. Nothing severe, a tight muscle– likely due to compensating back in the winter and being more prone to it as a result. (Oh, how much one little toe can affect.) Heat, massage, and laser– repeat. Nothing that should keep him from competing, I was told. Nothing that would lead to injury when he ran. Movement was best, they said, resting would just create more chances of stiffness. Don’t scratch, my trusted professionals said. Yet– still– that worry.

So then came a decision, to run or to slink back to the choice that has been my go-to the last few months. To choose to be “safe” (a loaded word) rather than to compete. Even in that one day trial before Nationals I pulled from my last run of the day, the familiar fear welling up a little too high for me to stay. But that was local, that was an hour drive, that decision felt easy at the time, even if it wasn’t necessarily the right one. This one felt almost impossible. I hadn’t anticipated having to worry about if we should run– more how we would run without much prep. I wouldn’t have traveled all that way if there was even a possibility of that question. But, here it was. I spent that night suspended in worry. I looked for answers in every one else but myself. I had been told what to do, but I wanted impossibly more comfort that I was making the right choice. The next morning Bolt was moving smoothly, evenly, no hint of the soreness that had been there the day before. A friend remarked that the change was “night and day.” We consulted with the chiropractor again who was very happy with how everything looked– he reiterated what he told me the day before, we could and should run.

I walked the course and decided to go for it. It wasn’t a joyful one, I was afraid from the start line. I was afraid of the dogwalk, of a hard turn, of the teeter. Yet, he ran like a dream beside me. Fast, connected, tight– too tight, even. He took an off course tunnel after a very efficient rear cross but I didn’t feel the sting of that. Instead, I waited long after that run with bated breath, afraid for a tight muscle to come back. 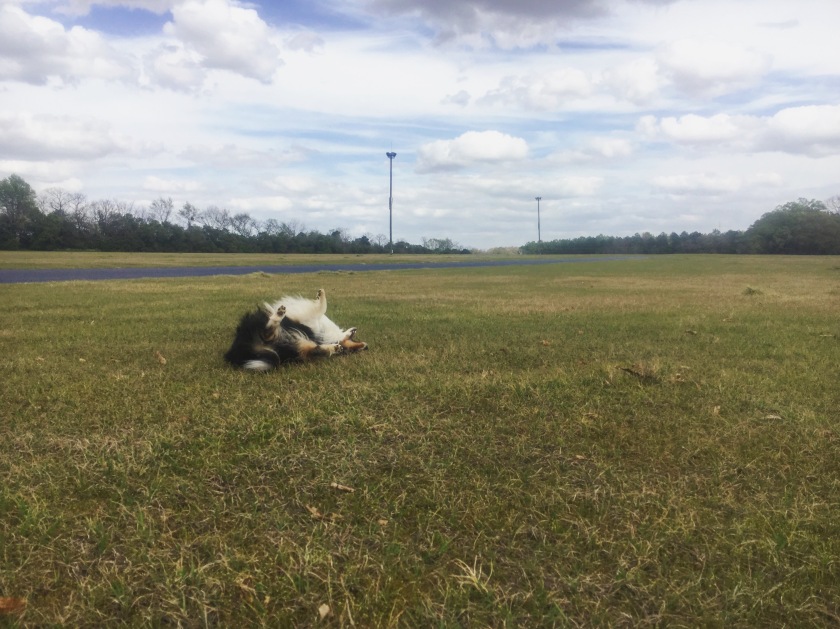 After a pretty clean jumpers round and a sound, happy dog I felt a small wave of hope and confidence return– until I was told by someone that the reason our standard round came undone was because I gave up. I felt sort of crushed by that. I had been so full of worry that morning and in that round, even if it didn’t appear that way to everyone else. I don’t think I ever give up on my dog, in or outside the ring. But that moment felt like a turning point for the weekend. I could either be consumed by it, or motivated– I’m so glad I chose the latter.

We ran hybrid fast and connected. A call on the teeter came, but still, I didn’t really mind. We were back to running like we run. Bolt felt like he did back in the fall. All bars up, all other criteria met all weekend– two small handling errors on my part kept us from finals. Then, after walking outside, sitting in the grass under the warm Georgia sun came the difficult balance between feeling disappointed that I didn’t do a better job and feeling overwhelmingly thrilled that my dog was sound and healthy, that we got to run together again– more than once, more than just one day, and it felt pretty damn good, too. The disappointment about my own performance (not my dog’s) didn’t last long.

I stood with a friend I don’t see often enough before Challenger’s and we discussed handling and nerves. We laughed and breathed and it was more than a thrill to watch her lay down a beautiful run. There were hugs with friends and laughs all around. I accepted a gorgeous photo of last year’s World Team and a jacket I dreamed of wearing since I was a kid. We cheered for every finalist. Joy.

Disappointed in myself at first, maybe, but there was so much good to take from NAC this year. I think in many ways it was one of the best things that could have happened at this point. I had to face a fear head-on. There was no escape, there was no running back home, there was no way to turn away from it like before. I was reassured that my dog was healthy and able to run and I had to trust– I had to listen not only to those who told me, but my dog who was so obviously radiating back that he was okay, that he was strong, that, yes, sometimes stuff just happens and then you’re fine. I had to trust him that he was fine.

With fear we have two options: to run from it, or to overcome it. I choose to overcome the fear that has kept us holding back for so long. I choose to no longer give it life. Last night we ran our first prep course for tryouts just four short weeks away and realized we have retained far more skills than I ever thought possible. I’m excited for this next adventure, more than the last, even. I’ll never give up on this dog, just as he’s never given up on me.

So fear? You’ve had your time. Now it’s ours.