Recently I heard about a social science experiment that explored what almost winning did to a person’s outlook. This was related more in context to coming close to winning the lottery (think of that outrageously massive Powerball jackpot last month) and what that would do to someone’s overall motivation. The predicted result was that getting close and losing, or coming up just short would likely negatively affect that person– would make them less likely to play again, or feel frustrated with the process and be unsatisfied with the outcome. But, interestingly enough, that’s not what happened at all. Instead, people who came close to winning– be it the lottery, or a video game, or a race– but ended up just missing out on winning weren’t dejected or deflated at all. If anything, they were more motivated to try again or seek out a reward even faster than those who won.

I found this fascinating and, as these things so often seem to be, extremely timely for me. I’m reluctant to write that I came up short at Westminster because for all intents and purposes I feel like I won the whole damn thing—at least that’s how my heart feels (I can see that giant beautiful red—yes, red—ribbon from my bed at night and I still smile at it). So sure, coming in second place is sometimes difficult because it means we were SO close to winning, we were RIGHT there… but missed it. I, much like those participating in the social experiment above, didn’t feel defeated or dejected after that though. If anything, I feel renewed and excited for our sport in a way that may have been waning in the last few months. Last weekend was a completely different experience than the previous year’s competition. Although “different” doesn’t really do the comparison justice. Last year, driving home I felt a bitter sting of disappointment in myself. Feeling sad for my dog who couldn’t possibly feel sad about getting to do agility for the day. So what he had fallen off the dogwalk? (He likely had already forgotten this part) Falls happen. He was fine, he bounced back up, he wasn’t injured—life goes on. But I had felt I failed him and myself.

The Beast, I had written then, won that day. The stinging gave way to determination. I wanted to go back—I wanted a chance again.

If you haven’t been to Westminster agility yet it’s something I recommend trying at least once. If nothing else, it is an incredible sensory overload, energy-filled event that isn’t easily matched. We were awake by 4am, ready to to claim rooftop parking at the pier—huddling inside our cars against the negative-degree winds blowing off the Hudson. We spilled onto the green carpet, my ankles protesting against the biting cold (I know, but I wore my cutoff Lululemon pants in case of a television appearance—one must always be prepared). We got our numbers, found space at benching, and settled in the best we could. The 16’s had a while to wait, so I busied myself the best I could to avoid another repeat of Cynosports—idle hands, idle minds, that whole thing.

The energy there is something unique entirely. It’s unlike Nationals, or even World Team Tryouts. It’s almost frenetic– a constant hive-like buzzing of movement and noise. The spectators watching from the stands don’t really know what they’re looking at, just that they really like it. Bursts of applause for dogs with fast weaves, thunderous applauses for clean rounds—especially by dogs that are eye-catching, or dogs who are adorable (this means it’s basically applause all the time). The crowds thicken by lunch to the point where pushing through the throngs may mean you’re a little later for your run than expected. Last year I could see Bolt’s eyes wide, seeming to absorb that energy. It pushed him past the threshold he had. But this year was different. I felt him focus in a way he didn’t (or couldn’t) last year. He’s maturing and thankfully I’m not too far behind him. 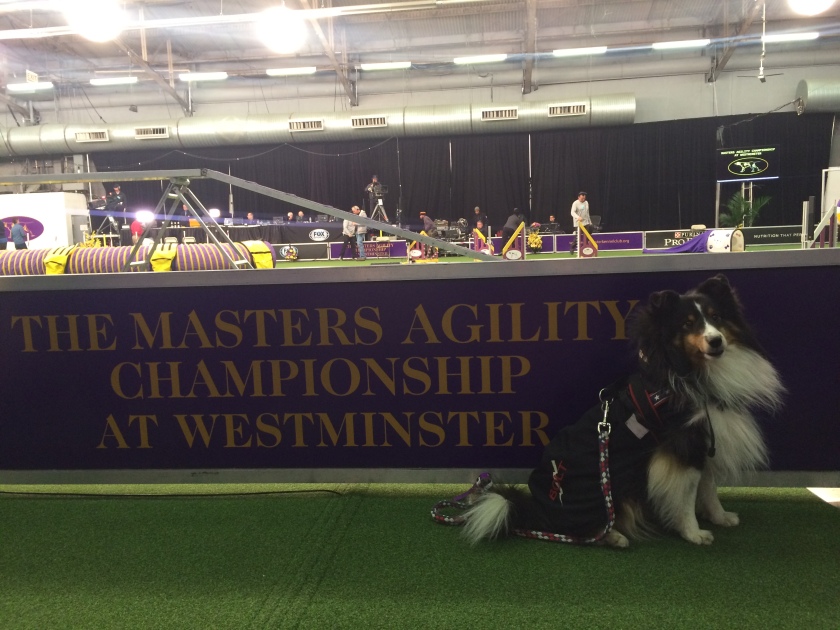 When friends texted asking how the class was going, who was in the lead, what the times looked like, how I had placed, and how finals were going to be determined—I honestly didn’t know. I wasn’t keeping track. It’s not that I didn’t care, it was just that I didn’t want to be wrapped up with any other team beside my own. You have no control how any one else does, you can only control yourself and your run. I’ve been searching to find the mindset needed to block out the noise and the fears and the doubts bigger competitions can bring with them. I don’t have the background others do, or the experience of handling that kind of stress and pressure in another sport—but that doesn’t mean it can’t be learned. I’ve been wanting to prove to myself that this was possible. I had a discussion that morning with a friend about the mental game. I admitted that more than almost anything, improving my mental game was at the top of my training to-do list. The agility skills are there, the dog I am privileged to run is incredible, I have gotten my body into better shape to be there for him– but my mind needs the improving.

I’m not saying I have it down just yet. I believe that mental game is something we must consistently work (like our muscles) to ensure it is strong and adaptive depending on the situation. But it was an injection of self confidence that I was previously lacking. It was a step closer. So did we come up short? Sure, a dropped bar gave us second place. But to me, the experience was worth every groan the crowd let out at that moment. I got to run my dog like I know we can run at a competition. I got to push, I got to feel that amazing rush of when everything harmonizes. I got to fight for that second place. I know we laid everything we had on the line and put down the best run we had in us in that moment.

If that’s coming up short, then so be it. I’m happy with where we’re going.

Our three runs from Westminster for those who haven’t already been bombarded with them enough: