If we’re lucky enough in agility, we get the chance to make choices for our dogs. The shows we enter, the goals we set, the seminars we attend, the handling options we take– and sometimes just getting to choose agility in the first place.

I’ve never known a dog with the intensity Bolt has. It’s frenetic at times– over the top to the point of chaos. This was much more apparent when he was younger and his turns resembled that of a sports car with poor handling on a wet track with a bad driver. His desire to work overrode his desire to keep himself safe and many times I would have to stop him, ask for a mental re-set before he took out another wing jump with his body, or fell from a contact, or slid across the grass. I take the blame on quite a lot of these mistakes early on. Before him, I had never worked with or owned a dog with that much drive and so I fumbled to reign him in– sometimes too caught up in our shared joy of just running and doing everything really f*cking fast (expletive 100% needed).

It took nearly four years to get our footing as a team and even still, he’s never an easy dog to run. I’ve envied those who can “dust off” their dog after a break or some time and enter the ring on a weekend, win each class, and move on. Bolt was never capable of that mindset. We’d dust off for weeks at a time, carefully managing his intensity which always surged back at full capacity the second I asked him to work. There has never been a time where he gives me anything less than all of himself. From two jumps in the backyard, to a local trial, to Worlds– it’s all the same to him, truly. Pupils wide, foam at the mouth, twitching muscles: all of it is the same no matter the time or place.

He has never been an easy dog to train, or run in this sport. But every step of the way with him has made me better than I ever thought possible. 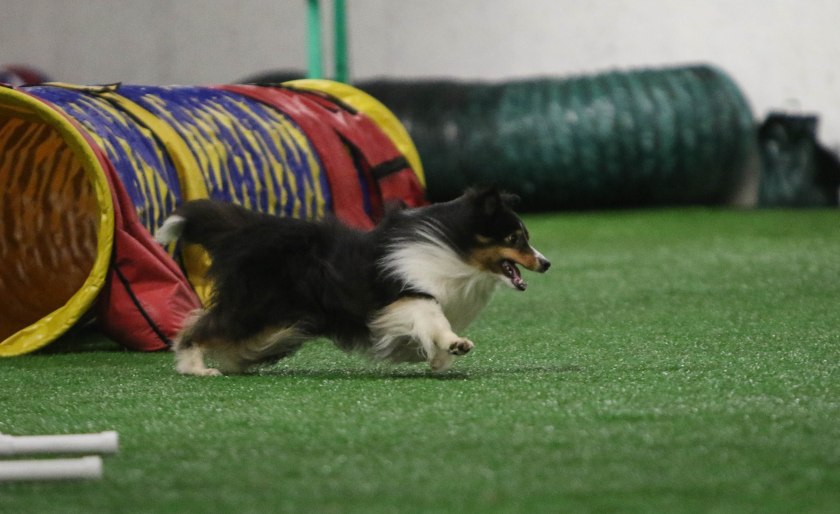 Unfortunately though, sometimes that caught up to us.

A couple years back he began having nagging soreness in his shoulder. It was easily managed though, infrequent, and he was never really bothered. I can’t pinpoint when it actually started but I do think it was at a team practice where he took a wing jump out (as he unfortunately can often do) on a slice. I took him to every expert in the area in the time that followed trying to identify exactly what it was. Mostly, I was told, soreness is expected, dogs like him are hard on their bodies. Don’t you get sore too sometimes? they’d ask. So, a couple times a year, we managed it. If he needed rest, we rested– usually longer than originally proposed– if he needed exercise, I followed it to the letter. At the end of 2017 I wanted to do more. If you’ve followed this blog in that time, you’ll know the details of PRP and the year of rest and rehab I spent trying to mitigate soreness that still didn’t have an official diagnosis or name. Tendonitis is what the doctors settled on in the end. A mild case, too.

For a year I worked on dusting off. Safe approaches, safe lines, safe amounts of time spent on course. Not overtraining, not overworking. By early 2019 I was ready to take the chance on team again.

Then Friday came. A five-minute session ended with a tunnel and a toy. And suddenly my solid, skilled dog was not himself. I felt an all-too familiar sinking sensation in my chest, as if it were being squeezed of the air inside.

Choices aren’t always simple to make, especially when goals and dreams are on the line. I’ve never thought of myself as someone who would give up easily and I don’t think I ever have. Skipping tryouts last year and taking time away from the sport was an essential part of recovery to come back later. Stronger and better– that was the goal. That wasn’t giving up: that was still doing the work. But now this leaves a different choice to make. The hardest, yet simplest one yet.

A sentence I’ve spent a lot of time thinking about, but have been too afraid to give life. It feels unfair, making this choice, especially just two weeks shy of what was meant to be our last shot together. In the last month I’ve opened myself back up to dreaming again, envisioning us together on that turf, in that stadium, with that crowd– wearing That Uniform. I knew it was a dangerous thing to let back in. It has felt tenuous for a long time, this. But maybe, I thought. Just one more.

At the same time, I know this choice is one of privilege. Getting to choose my dog’s future is a very fortunate thing and so I’m trying not to give myself too much chance to feel sorry for us. Bolt puts the same heart, energy, and love into those two jumps in the backyard that he does at Worlds, afterall. For him the goal was never anything more than doing his job the best (and fastest) way he could. It was about us. Simple, pure, nothing lofty about it.

I’m not sure what the shape of our agility future looks like just yet, though I like to think it’s far from over.

Thanks for the journey so far, bud. ❤