I set off to write about disappointment, but I couldn’t get myself to get through it. Because as I was starting to write about what was disappointing to me, it became apparent that it wasn’t something to be all that upset over. In the scheme of things, it felt almost trivial. Most of the things we work ourselves up over aren’t things worth worrying or stressing out over in the first place. The truth is, I had been excited to attend a seminar for the last months– one with someone I’ve never trained with before, who may have had some insights that I don’t get by training alone so often. Who may have given some skills to apply for the spring, and moving forward on this journey. I had worked myself up to be excited for it. I had my notebook prepared, already in my bag. I’d been a student for 20 years, I was excited to be one again for the sport I love.

After an incredible weekend (more on that later), Bolt and I settled in to our early weekly routine. Training briefly before teaching for a few hours Monday. Waking up Tuesday morning to bark at the blender, run outside, and pull every toy out of the basket and squeak them incessantly (all of which are his routine, by the way). But by Tuesday evening, on my way home from work, I got the call that we all dread: “What time is the vet open until tonight?”

Nothing serious. When he worked himself up, Bolt gave a few hoarse sounding coughs. Even still, we lugged ourselves to the vet. Antibiotics given, no more coughs after that– I doubted the possibility of the weekend happening. When we got home I sat on the floor with him and felt sorry for us. Upset because my poor kid, my lively happy reflected soul, wasn’t as well as he had been the day before. It’s nothing contagious. It’s, thankfully, not a case of kennel cough. It’s likely something bacterial, he’s improved with medication, something he probably picked up while inhaling a face full of dust Monday night. He’s given the occasional cough since, but nothing persistent, and nothing that has changed his desire to bark at blenders (vacuums, hair driers, brooms… you get the point), run outside, and squeak toys. If anything he’s been looking at me each night as if to say, “What are we doing? Why are we inside? Let’s do something!”

So that’s that. After four full days of holding out hope that things would be fine, I had to admit that they weren’t. That what I had built myself up to wasn’t going to happen. And even now, writing this, yes I’m disappointed, but there are far worse things in this life to spend our energy on. There are far worse things that could happen. The best thing in life is to believe that things are happening for a reason. My spiritual connection to this world has grown, my heart has expanded, and my soul has become more full through it. There will be other seminars, other training days– in fact, I’m already planning for others. I’m just so grateful to have a healthy dog at home who will be able to continue learning along with me. 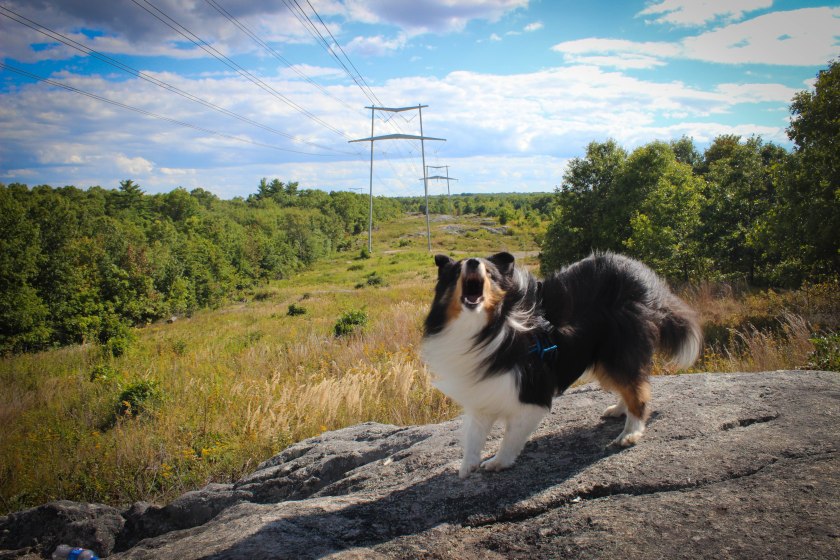 Disappointment aside: this past weekend was incredible. It was the two year anniversary of Bolt’s AKC agility debut, so it’s always a cool time to look back over the time I’ve had with this awesome creature. It was a weekend to be surrounded by some of my favorite people. Bolt won 3/4 of his classes with some of the best times he’s every laid down on a course. He blew me away. Seriously, will that feeling ever go away? I hope not. My partner in crime, Carolyn achieved what she’s been working towards: a blessed, beautiful double Q. And it was also a time to take a leap of faith, and to continue this year of change.

I got a tattoo.

Yep. After many years of talking about it, dreaming about it (I actually have nightmares about bad tattoos), and planning out what it would be, I finally just did it. Maybe I had a little peer pressure to get me there, but I won’t name anyone (eh hem, Carolyn). I said two years ago that I would get a lightning bolt tattooed on my left ankle after I had achieved a personal goal. But quite frankly, why wait? Why not instead grab your goals by the face and say, ‘I will find success whether you happen when I planned or not’? Don’t spend your life waiting for the future to happen. Embrace the now. Take the leap. The rest will follow as it’s meant to.

So a lightning bolt; perhaps a little predictable, but perfect nonetheless. A symbol of natural beauty, rarity, energy, strength. A symbol of the dog that came in to my life with the help of a friend I miss every day– for the dog that renewed my love for this sport, and gave me a better appreciation for this life. A symbol I’ve worn every day for good luck since September 2012 and will now wear with me for the rest of my life.

So here’s to the ups and inevitable downs; to the success we will find no matter what, and the good energy moving forward in this life together.

3 thoughts on “Embracing the now”